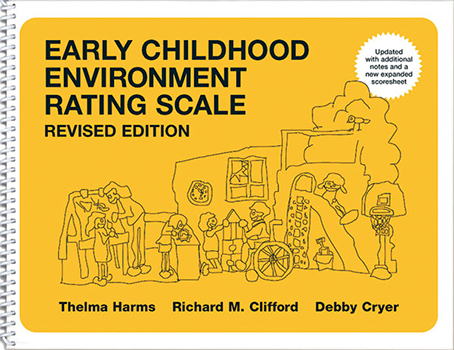 The revision of the ECERS has been a long and exacting process. In the revision, our intent was to balance continuity and innovation. On the one hand, we wanted to be sure to retain those features that had, for over 15 years, made the ECERS a useful instrument for both research and program improvement. On the other hand, we wanted to update and expand the instrument to reflect changes in the early childhood field that had occurred since the ECERS was published in 1980, and to incorporate the advances in our own understanding of how to measure quality. During this time, inclusion of children with disabilities and sensitivity to cultural diversity had become important issues in the assessment of program quality. The measurement of quality itself received greater attention through the development of the Accreditation Program of the National Association for the Education of Young Children (NAEYC, 1984) and the publication of several early childhood assessment instruments. During this period of self-examination in the field, the definition of program quality embodied in NAEYC's Developmentally Appropriate Practice (Bredekamp, 1986) was revised in 1997 to include a greater emphasis on cultural diversity, family concerns, and individual children's needs (Bredekamp & Copple, 1997).

Our own understanding of how to measure quality was increased through the development of three additional scales using the ECERS format, each with its own improvements and refinements: Family Day Care Rating Scale (FDCRS; Harms & Clifford, 1989), Infant/Toddler Environment Rating Scale (ITERS; Harms, Cryer, & Clifford, 1990), School-Age Care Environment Rating Scale (SACERS; Harms, Jacobs, & White, 1996). Numerous research projects in the United States and abroad had used the ECERS to assess global quality and had discovered significant relationships between ECERS scores and child outcome measures, and between ECERS scores and teacher characteristics, teacher behaviors, and compensation. Along with these research findings, feedback from a number of researchers concerning difficulties with particular items was a valuable resource for the revision. The ECERS was also translated into a number of languages, including Italian, Swedish, German, Portuguese, Spanish, and Icelandic, and was used in an international study (Tietze, Cryer, Bairrio, Palacios, & Wetzel, 1996). Although the basic scale remained the same in the translations, some changes were required in a few of the indicators, and especially in the examples for indicators, to make the various translations culturally relevant. These changes were helpful to us as we undertook our own revision.

In addition, the ECERS was used in a number of ways as a program improvement tool in many different settings, including those serving culturally diverse populations and in inclusive programs. In the 17 years that the ECERS had been used in research and program improvement, a body of evidence of the validity and usefulness of the scale was amassed, but clearly a thorough revision was needed.

Three main sources of information were used during the process of revision: (1) a content analysis of the relationship of the ECERS to other global quality assessment instruments and documents examining early childhood programmatic issues; (2) data from studies using the ECERS in preschool, child care, and kindergarten settings; and (3) feedback from ECERS users. The content analysis helped to identify additions and deletions to consider; the data from numerous studies using the ECERS gave us information about the range of scores on various items and the relative difficulty of items, as well as their validity. By far the most valuable contribution to the revision came from the feedback provided by researchers and practitioners who had used the ECERS in a variety of ways.

To collect information from ECERS users, three focus groups were held: one to explore how the ECERS functioned in inclusive settings, and two to examine its use in culturally diverse settings. We were fortunate to have access to experts in these two fields who had used the ECERS extensively across the country and could provide specific suggestions. We also held feedback sessions with researchers who had used the ECERS in their studies and who could make suggestions about the content and format from the point of view of research needs. In addition, a questionnaire was circulated to the many individuals, programs, and projects that were known to have used the ECERS extensively, and we received helpful suggestions from people in the United States, Canada, and Europe.